Queen Mary Centre for Religion and Literature in English, https://www.qmul.ac.uk/sed/religionandliterature/

The programme’s subject matter is the modernity of the 17th and 18th centuries and the reception of its texts in the contemporary period, and it consists of three themes. The first is dedicated to Jonathan Swift, a towering figure whose relationship to modernity is paradoxical in that whilst he is critical of it he is also the author of a major work of fiction reflecting a number of modernity’s narratological, moral, and philosophical stakes. The second theme is ‘lived religion’, which has blossomed in English-speaking countries over the last decade, through the scope of practices rather than ideas, i.e. the lived experience of men and women rather than doctrine. Conceived in this way, the theme is innovative in France. The third theme is the publishing, translation, adaptation and rewriting of modern texts through examples of historical, philosophical, and fictional texts. This approach includes the new issues related to digital humanities, which renew the objects, methods, dissemination, recognition, and institutional stakes of research.

Beyond its respective thematic activities, the programme also offers a seminar common to all three themes and which is organized in biennial projects; for example, from 2018 to 2020, we and our guests explored the notion of progress.

In his fictional narratives as well as his other writings, Jonathan Swift conveys a critique of modernity, which can be seen as represented in his contemporary Daniel Defoe; yet he is also the author of a leading work reflecting a good number of modernity’s  narratological, formal, thematic, political, moral, and philosophical stakes. Our research is based on the very dense international critical bibliography, but also on the comparison with Defoe, seen as the dialectical counterpoint to the emblem of modernity, and on the contribution of contemporary French conceptualizations and literary reinterpretations. A book published in 2016 by the person in charge of the theme serves as a starting point. A policy of book acquisition by LERMA and the University Library ensures that the most recent works are available. A collective work in English, based on the 21st-century re-questioning of Swift’s major works, and whose epistolary form is innovative in itself, is being prepared by the members of the theme. Young researchers are closely associated with the work being conducted. Partners: academics specializing in Swift (Oxford, Yale), including an honorary doctor from Aix-Marseille University (2012), with whom we have already collaborated.

Research on ‘lived religion’ has been flourishing in English-speaking countries over the last decade. At the crossroads of history, a literary approach to texts, and sociology, this object of study acts as a prism, thus revealing new nuances and gradually redrawing the outlines of religion studies. Through focusing on practices rather than ideas, on lived experience rather than prescribed theory, a significant methodological shift is taking place. It is a matter of moving away from the traditional ‘top-down’ perspective, whose limits are now recognized, in order to approach the religious fact differently, from a ‘bottom-up’ perspective. In France, lived religion is a field that has scarcely been explored for the moment, and has only been barely touched upon by a few historians. The aim of this theme is to bring together all of the University’s researchers working on these questions, regardless of their discipline, so as to build up a network of partners, especially European, and reflect on the methodological structuring of the field. Its current institutional partners are the EMoDiR International Research Network and the Queen Mary Centre on Religion and Literature in English (London, UK).

Theme 3C. The Text and Its Posterity

The research subjects of this theme share an interest in textuality, i.e. publishing, translation, rewriting, and literary adaptation. The first line of enquiry involves the publishing of sources and texts (religious manuscripts, writings of Sir Thomas Browne, Oxford University Press), with the projects led by two research directors working on the theme. The second line concerns the translation by three researchers, including a professor specializing in the Young America Movement, of the diary of American statesman Gouverneur Morris (1752–1816), as well as the translation of Daniel Defoe’s The Storm (1704) by a researcher, in collaboration with a colleague at the University of Lyon 3 (France). The purpose of a third line of enquiry, based on various theoretical contributions, from Gérard Genette’s theories of intertextuality to Linda Hutcheon’s work on the poetics of postmodernism and on adaptation, is to better identify both the nature of the processes by which existing texts are appropriated, reworked, or rewritten, and that of the resulting intertextual networks of all kinds. It focuses on the rewriting of classical texts. The publications of the coordinator of the theme examining the literary posterity of Jonathan Swift’s Gulliver’s Travels (1726) are the first stage in a larger research project on this topic, which also echoes Theme C1. 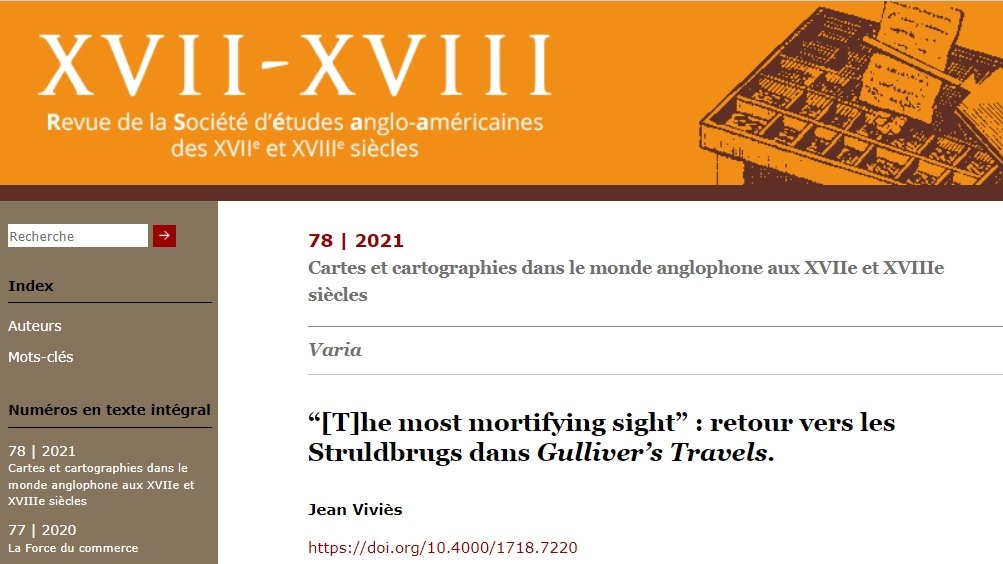